We began with the central mission of the brothers: Rajah Indarapatra and Rajah Solaiman intended to clear the land of beasts and monsters in order to allow a population to flourish, to make Lanao out of a forbidding country, to cultivate a folk out of a scattered and terrified people. I wish to end this set by looking at how this mission fared after Rajah Solaiman fell to the sixteen hands of Omaca-an.

"Rajah Solaiman who would never yield to any enemy, fought desperately with the eight giants. After a severe struggle the giants overcame him and cut off his head. The ring and sword were dropped in the water not far from this cape. This ring became a haunted sprirt; during any night when you see an incandescent light which seems to go about the lake, that is the ring of Rajah Solaiman." In [1] and [2].

The ring's transformation into a corposant leaves us a few thinking points. What attracts me is the idea of perpetual movement set within a limited circuit. This seems emblematic as punishment upon a failed quest. It deprives the hero (or his essence or extension) both progress and rest. He still goes through the motions, and while it may be too much to think of this as possibly a reward, maybe this fate affirms the heroic, that what we have here is a spirit too stout to know when to quit. Indeed, the Rajah "would never yield to any enemy," and so we must expect him to persist beyond death, beyond defeat. Still, the failure holds, the haunting of the ring seems to me less of a life and more of a lingering flicker of the past. Whatever was living in Rajah Solaiman belongs now to "you" if you see (or call to mind) the corposant and remember the sacrifice behind it.

I read up on our corposant stories, then asked my colleagues Emman and Tilde about these. So far, we have yet to hear a story of the santelmo (also: santilmo or sansilmo) as a benevolent—much less a provident—phenomenon. As Emman noted in our e-mail exchange, "laging may kapalit na dugo ang gintong gantimpala ng santelmo." I wanted to know if Rajah Solaiman's ghostly ring became a source of fear for the folk. If so, then a new monster was born out of the drive to purge monsters. Thus, this birth would represent a marginal but I think interesting parallel to the peopling of the land. Or, if it is a rebirth, then maybe we have a parallel to the transformation of the scattered people to "folk," a more cohesive group with shared goals, values, and stories. Perhaps the Rajah's legacy was to provide terror, provoke song.

But if we suspend all the other santelmo stories, this tale suggests neither beneficence nor hostility, just a presence which goes "about the lake". If there was terror, maybe it has passed, absorbed by Rajah Solaiman's the endless struggle of spirit. Blood belongs to the past, that price has been paid, only the memory remains, the light, and the gift that lingers—as well as the cost, at present—is the telling of the story. 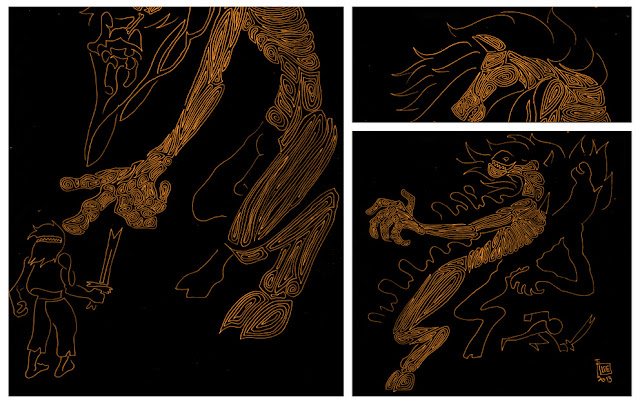 "Omaca-an brought Rajah Solaiman's head to the upper part of Bacong. This place was called Olo because it was the place where the head of Rajah Solaiman was brought and devoured by this giant."

Who was to call that place Olo? Who was to name the landscape, re-configure the scene by imbuing it with story? The place would proffer neither sound nor meaning without the folk who would arrive in the wake of the first Rajah's fall and the next Rajah's revenge. Perhaps it was the place that came first, how it struck some people as something very much like a head. With an observation such as this for a seed, perhaps the tale grew in small increments (as the Rajahs cleared the land one peril at a time), merging at some points with neighboring stories (as Rajah Indarapatra's marriage to Ba-i a Karimbang), mutiplying in terms of scope and versions (Omaca-an) but also shedding elements along the way (Rajah Solaiman, later Omaca-an), always alive yet never achieving final form (the incandescent ring).

I now take my leave of this project to pursue a matter of small but significant revenue. Tilde shall likewise move on to other things after his (tongue-in-cheek?) intermission, but I hope we (and others) shall drift back to this or similar pages.

Thus far, I have read only half the tale. Omaca-an has yet to taste defeat, Rajah Indarapatra has yet to exact revenge, the devil spirit has yet to offer instruction. But we close the book on our Rajah Solaiman, who has given what blood he could for the song that was to become Lanao.