Proposals should contain background fantasies and paint the town in Love as “revelatory [and] bittersweet.” Proponents may not want to get over. This means that they were born in the day of the carriage located at the fourth floor. Free of formaldehyde, decadence, erosion of slightly convex wall space, 2.59 x 25.3 meters each. Floor plans help deliver shine, rice protein, and the advent of the nuclear age to this authorized rejection.

Proponents may be disqualified if unopened and unused, the left eye rubbed away.

You can’t say it that way any more.
Bothered about beauty you have to
Come out into the open, into a clearing,
And rest. Certainly whatever funny happens to you
Is OK. To demand more than this would be strange
Of you, you who have so many lovers,
People who look up to you and are willing
To do things for you, but you think
It’s not right, that if they really knew you . . .
So much for self-analysis. Now,
About what to put in your poem-painting:
Flowers are always nice, particularly delphinium.
Names of boys you once knew and their sleds,
Skyrockets are good—do they still exist?
There are a lot of other things of the same quality
As those I’ve mentioned. Now one must
Find a few important words, and a lot of low-keyed,
Dull-sounding ones. She approached me
About buying her desk. Suddenly the street was
Bananas and the clangor of Japanese instruments.
Humdrum testaments were scattered around. His head
Locked into mine. We were a seesaw. Something
Ought to be written about how this affects
You when you write poetry:
The extreme austerity of an almost empty mind
Colliding with the lush, Rousseau-like foliage of its desire to communicate
Something between breaths, if only for the sake
Of others and their desire to understand you and desert you
For other centers of communication, so that understanding
May begin, and in doing so be undone.

My experience thus far has been curtains pulled up every other line.

I'm taking *murmuration with me too now, thanks! I heard starlings could gather over a town to the point of being pests so murmuration seems like a town possessed by gossip. I once thought MacLeish was being clever, maybe even sly with "A poem should not mean / But be." When you factor in that negation such as that which our friend saw then it might as well go "A poem should not mean / But be mean."

That seems to be a self-referential song with lots to say about rhymes and meaning, and as for this poem, "Ut Pictura Poesis" is not a very ordinary girl or name. Meanwhile, it's fun to put "Closer to her than to me" and "hearts that never played in tune" on the same page as "His head / Locked into mine."

It's great to see you here (and I found her too). "Dangerous Moonlight" had a title that was taken from a song (or a film with a song?), so I suppose it's something he could have done for this poem as well. Putting Horace and Bread together, that kind of thing's just wow for me, though I suppose high brows would like to keep JA "literary". But that's just it, he's expanding what "literary" or "poetic" could be. Latin's the classic source, a dead language in the sense that no one's born into it, but it's renewed here, even if only to say that it can't be said that way anymore. That's what I think about the Latin, though I'm certain there's more to be said about this particular sampling, esp it's place in the title, the place where you'd easily (conveniently?) find a female name (as in the poems of Jonson and Poe and even in Williams, in a lot of songs, perhaps excepting "A Boy Named Sue").

"As those I’ve mentioned. Now one must / Find a few important words, and a lot of low-keyed, / Dull-sounding ones. She approached me" comes across to us as pointers for a new (or renewable, renewing) poetic diction, but JA might as well be talking about sources. This poem could be a lyric equivalent of his keeping Zeus and Popeye together in one rambunctious sestina.

Dolphins are associated with Dionysos (Apollo's aesthetic opposite, if we trust Nietzsche). I looked up delphinium images (will probably never see one "face-to-face") and saw that they were very skyrocket-like.

Or that poetry should bypass usual logic for a logic all its own? Of your take on hinges, I'm most drawn to "two media of expression". In this poem, there's an opening to more media ("or other centers of communication, so that understanding") as if JA anticipates that the reader's off to other "lovers" after the poem, maybe trying to "catch" (in painting: "capture") the reader in the act of leaving a poem behind.

I'd look for hinges under the seesaw, and by implication, between the locked heads (of reader and poet? of poet and artist? poet and poet?). There might be one in the sled too, but I'm not sure. Or between boy and sled? Kane and Rosebud? If hinges are how one thought connects to the next in this poem or in Ashbery in general, then I'm all for that picture (and many other pictures besides).

Or "hinges" could very well be one of those low-key words that we'd been asked to look for. Now I'm looking for hinges everywhere, even along the spines of those testaments.

Examination at the Faculty of Medicine, 1901 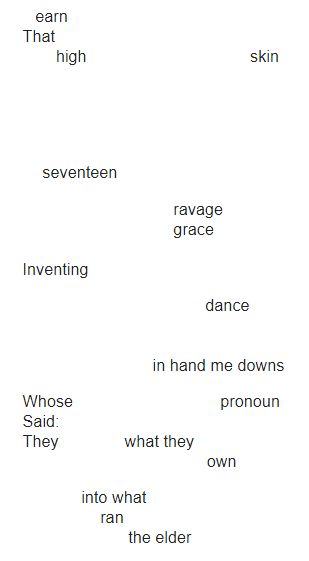