above is also an idiom

photographs an air
which are taken from human

to dialogue
out from blocks of detergent

2 Records revealed instances when the suspended CPNP met with the President and Napeñas to discuss Oplan Exodus;

3 Napeñas chose to employ a “way-in/way-out, by foot and night-only” infiltration and exfiltration Concept of Operation (CONOPS) for Oplan Exodus.

4 If thou meet thine enemy’s ox or his ass going astray, thou shalt surely bring it back to him again.

5 The second planned mitigating action was the commissioning of the peace process mechanisms to facilitate ceasefire.

6 Thou shalt not wrest the judgment of thy poor in his cause.

7 Keep thee far from a false matter; and the innocent and righteous slay thou not: Midway between WP8 and WP9, the reinforcing troops came under heavy enemy fire.

8 Ineffective communication system further exacerbated the situation: for the gift blindeth the wise, and perverteth the words of the righteous.

9 Also thou shalt not oppress a stranger: maneuvers, such as the “Bounding Overwatch” technique, would have been difficult and may result to more casualties.

10 The request for artillery fire was put on hold since, according to Pangilinan, they still lacked details as mandated by their protocol.

11 But the seventh year thou shalt let it rest and lie still; its targets, Jihad and Usman, were able to escape and remain at-large.

12 Six days thou shalt do thy work, and on the seventh day thou shalt rest: that thine ox and thine ass may rest, and the son of thy handmaid, and the stranger, may be refreshed.

13 “A commander is responsible for what his unit does or fails to do”: and make no mention of the name of other gods, neither let it be heard out of thy mouth.

14 Three times thou shalt keep a feast unto me in the year.

15 Such Manual provides that it is “only in urgent situations when intermediate commanders may be bypassed.

16 And the feast of harvest, the firstfruits of thy labours, which thou hast sown in the field: should be notified of the context of the order as soon as possible by both the commander issuing and the commander receiving it.”

17 Three times in the year all thy males shall appear before the OIC, CPNP PDDG Espina (as senior commander) to Napeñas (as intermediate commander).

18 PDG Purisima could not legally form part of the chain of command by reason of his suspension; neither shall the fat of my sacrifice remain until the morning.

19 He alone answers for the success or failure of his command in all circumstances. Thou shalt not seethe a kid in his mother’s milk.

20 Behold, I send an Angel before thee, to keep thee in the way, and to bring thee into the place which I have prepared.

21 This concept however does not conform to the established and acceptable operational concepts and protocols of the PNP; for he will not pardon your transgressions: for my name is in him.

22 Without coordination, following the AFP definition, support to operating units such as artillery or close air support is not possible since these entails preparations; then I will be an enemy unto thine enemies, and an adversary unto thine adversaries.

23 Command and control is critical to a coordinated and collaborative response to the Mamasapano incident: and I will cut them off.

24 Thou shalt not bow down to their gods, nor serve them, nor do after their works: these devices fell short of what were needed to relay real-time information and coordination of activities to and from the chain of command.

25 And had to rely on distinctive gunfire to approximate each other’s location, and thy water; and I will take sickness away from the midst of thee.

26 Some of the ordnance for M203 were defective.

27 The battery life was short because of wear and tear.

28 And phosphorus artillery rounds were fired late in the afternoon.

29 I will not drive them out from before thee in one year; lest the land become desolate, and by then, all of the 55th SAC lay dead except for one who was able to escape.

30 By little and little I will drive them out from before thee, until thou be increased, and inherit the land.

31 And I will set thy bounds from the Red US supported the operation by providing technical support to enhance monitoring of the troops on the ground.

32 Thou shalt make no covenant with them, nor with their gods.

33 It was observed that some parts of the returned firearms had been replaced.
Ipinaskil ni Dennis Andrew S Aguinaldo sa 9:07 AM Walang komento:

Putting the blog on hold until I’m done with this. 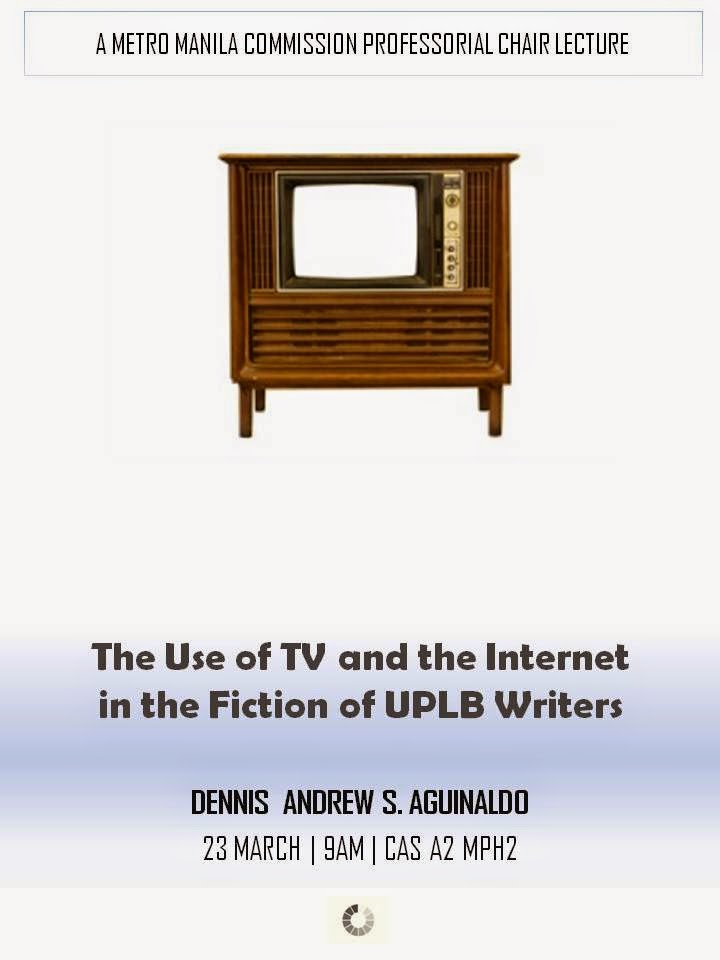 As of now, about fifty people are going. The emcee has confirmed, poster’s up, national anthem’s ready. I have soft copies of the stories to be discussed if you’re interested, please send a message or e-mail.

The paper will be revised following relevant feedback from the reactor and the open forum. Revision should be ready about a month after the forum. You may have that as well.
Ipinaskil ni Dennis Andrew S Aguinaldo sa 11:15 PM Walang komento:

Not that you learn.
I change.

I speak well of you. Have you been listening? Kindly remember your first tournament.
You called me a “head-hunter” so calmly, didn’t realize it was spit.

Going for the double points with almost every other move. It made for a fine show.
To the untrained eye.

You were predictable by the tenth step.
I thought you said the fourteenth?

Ninth. I had been encouraging you. Lies have that capacity.
It’s a history of failure, I get it.

I have been speaking well of you. Today was exquisite: you never did repeat a target.
I thought I’d rather fight predictability than fuss about you.

Which meant you never making the same move twice. Never a target repeated.
Many happy returns—

Which meant I could hide in the bruise you gave me. Then I could strike from there.
Yes. Now I see it. That’s what did it.

The curtains of your enemy thicken the longer a fight like that draws on.
If perceptive. If you give me time, will I learn?

You need every advantage youth can afford you. Fresh citrus, every now and then.
But will I learn?

Leave your wife some peace and a good pillow. Avoid people with weak fathers.
Excuse me?

Do not warm to the flames of those who have known little of the sun.
But they’re all around me. They’re my job.

Only if you have to listen. Their words are but velvet animals.
They’re the reason I train with you.

Never touch them as they touch back. They like to lead by the hand. They think it is that simple.
Have to follow where the knowledge takes me.

Nor can they take themselves as anything but toys. It is as far as they go.
You can’t make a rule of this. Look, some of them are serious.

Are playing at being serious. And may take as much delight in that atmosphere as in others.
I have been spending my days to overcome my father’s oversight.

Only the strong may lose strength. Others look strong, and the world would like to kiss them for it.
Because they’re always children.

Keep them ever away from yours.
I’m taking the job.
Ipinaskil ni Dennis Andrew S Aguinaldo sa 8:59 PM Walang komento:

C. Division
centers the most important vehicle
Creating an environment within
desks

like you could ever care for
like you could make me feel
mechanisms
now you'll never ever have to compromise
play and from life itself;