The Forever Hiccups of "I Taste a Liquor Never Brewed"

A toast to summer with a poem by Emily Dickinson. By all means stop at her signature, but you are welcome to join me for a further reading. The poem:

I taste a liquor never brewed —
From Tankards scooped in Pearl —
Not all the Vats upon the Rhine
Yield such an Alcohol!

When "Landlords" turn the drunken Bee
Out of the Foxglove's door —
When Butterflies — renounce their "drams" —
I shall but drink the more! 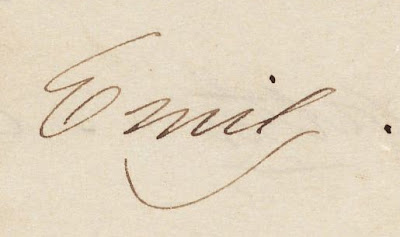 At once, the first line short-circuits the mind. It's almost impossible to move beyond that conceit: how can anyone drink liquor never brewed? How can it be considered liquor in the first place? How are we sure the liquor exists? Or, by association, the "I" of this poem?

It's akin to dwelling in Possibility. We normal folk reside in fact, in the "is" and not the perhapses of numerous windows. Likewise, we can only drink normal brewed alcohol. Dickinson's liquor did not go through this earthy process. On top of this, there's the added distinction of being "scooped in Pearl." In this line, we have a clash of registers. As cups go, "Tankards" are base things, cheap, a matter of pubs. "Pearl" connotes the finest of the fine. It carries the sea inside it, along with the sense that it was once hidden in a shell. Yet Dickinson commingles them (and stirs them in together with those r sounds), as if distinctions between high and low, between public and private have all but become irrelevant—that is, at least, in terms of this blurry-eyed drunkard and her fantastical liquor.

In "Not all the Vats upon the Rhine" we get the idea (especially with that exclamatory Alcohol) that this is a superior drink, better than any in the world. I hear, again, soundings of "I dwell in Possibility". If we have those narrow hands in the last stanza of that House, in this Tankard we have throat and tongue. If "Alcohol" is an equivalent of "Possibility," maybe we can extend this to signal a poem about poetry. To test this claim, let us follow the tongue...

In the second stanza, we rise from water. "Inebriate of Air—am I—"

Drunk with breath, with life? Much more! Our poet here is intoxicated with the taste of air, that plaything of the tongue, the spring of all words. The poem is distilled of speech, the more meaningful array of sounds, the supreme use of air. The dashes in this line (and in the whole poem, especially in the last line) not only make the poem sound drunk. They also embody the drunk state. They sound like the drunkard's hiccups here, air trapped and released, something that's never "under control". Because the poem is drunk, the metaphors sway to and fro. From the brewed wine of the first stanza, we have shifted to the juice of nature.

Then comes my favorite line: "And Debauchee of Dew—" which is again a marriage of the filthy and excessive with the pristine and minuscule (recall Tankard and Pearl). "Reeling—" in pain? No, more in keeping: in ecstasy, all throughout the "endless summer days". The frenzied whirling reiterates this endlessness. It's the drunkard's excess, the loss of a stable but pedestrian sense of time. "Reeling" is a stationary type of perpetuity in the sense that the poet is whirling in place. Again, there's the feeling here of being housed and condensed in finitude ("inns"). It's non-linear (which is the sense I get from the narrow hands in "I dwell in Possibility," how they trace lines upward to Paradise and thus somehow approximate it, then "gather" it). Here, it's circular. Like the Mobius strip, it's infinite not because of an endless number of points (or days, as in eternal life) but because it can turn and return upon itself within a finite set of points. Assume, for example, that the poet has but 64 summer days. These become endless because she visits them again and again through means of memory or art. Or maybe the poet has a finite set of themes, but through craft and insight, she can release the spirit of one poem to populate other poems/possibilities.

This infinity inside finitude is one of the greatest humanist compliments that can be paid to us creatures who have to suffer not only mortality but also the awareness of mortality.

After Dickinson's "endless summer days" we find an equivalent expansion of space when we hear "inns of Molten Blue". This line is reminiscent of the gambrels of the sky, Dickinson's grand domestic restructuring of the oppressive "dome of the sky" of the ancients. "Molten" is truly interesting (and looks like a Dali painting to me) maybe because it subtly prefigures a deluge. The previous line was about infinity, but in this one, the sky is falling.

Still in keeping with the manner of a true drunkard, the poem slurs toward another set of metaphors. Loosely from the dew (but greatly interrupted by summer days and those curious inns) we turn toward insect life. But who are the "Landlords" here? A story that says fairies inhabited these flowers. Or are they gods, are they foxes? What turns the poor bee out? If it's a glove, perhaps those are fingers (human fingers or the hand of God?) that shoo away the bee. As for the butterflies, what "drams" are they renouncing? Cocoons? Flowers? In the first, we have the meaning of new life, in the second, death.

Whatever they are, our poet/drunkard and her brew surpasses them. She exceeds these creatures who drink to survive (Niedecker's "Grandfather advised me" has the word "trade" for this). To reference another Dickinson favorite, the poet "comprehends" the nectar even more than the butterfly. Maybe she wants it more precisely because it's beyond reach, for how can the dew satisfy her who hungers so mightily for it? And how can anyone drink this brew of the "Possible"? This poem attempts to do just that—I believe, it succeeds.

Here we have the last stanza. The drunkard, the metaphor, the poet has taken flight to the extreme.

As with Butterflies and "drams," Debauchee and Dew, and Tankard and Pearl, "Seraphs" and "Snowy Hats" also makes (divine) use of the clash of registers that are commingled in terms of sound linkages and the sense of drunkenness  There's swinging too, for good measure, as if displacing the halos just wasn't drunk enough (or do these gestures hint at the rebel boiling inside the angels?). It's another shift in metaphor, but there's always a sense of movement (as in "The Brain, within its Groove") that keeps us in step with the poem, or at least in step with the drunkard in the/that is the poem. For example, the Bee and Butterfly's flight leads to the Seraphs and Saints above. It's possible that these Seraphs and Saints are parallel to the "Landlords" that could turn away all sorts of creatures (or sentence them). Anyone, that is, except for the poet who is locked in an impervious thrall, drinking "the more," "Reeling" well beyond her earthly limits.

Has the poet cheated death here, leaning as she does against "the—Sun"? With only that telling dash, the poet/"Tippler" comes closest to the Sun than all the others. While she is "leaning against" it, the Seraphs have need of hats, the Saints have need of windows. But what is "the—Sun"? Is it illumination? Death? Perhaps it is the wisdom that comes from the drunk striving of the poet, she who is most intimate with finitude.

Just now I realized that Dickinson's endless summer days must somehow extend the "summer's day" of Shakespeare's similar conceit ("when in eternal lines to time thou grow'st"). She places herself as the hiccup in Shakespeare, in the poetic tradition of the English language (as she is also perhaps the splinter in "The Brain, within its Groove"). Whatever Dickinson has begun, it shows no signs of relenting. For here we are, aren't we—dear reader—our minds reeling (happily, I hope!), these summer days of our brilliant dead yet carousing inside us, drinking in us, drinking of us, and with us—this Alcohol of the Ages. Cheers!
Ipinaskil ni Dennis Andrew S Aguinaldo sa 6:05 AM 3 komento: Mga Link papunta sa post na ito 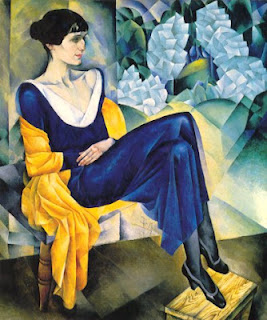