Half the "hi chomskies" thread 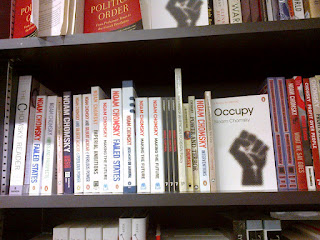 —trade-off nga lang, medyo tali ka na sa reading ng guide mo,whether on or off the mark. but you can read other 'takes' once you've tasted the original formula

—don't know abt kristeva, but some of them 'perform' their theory through their language. much like poets. si irigaray ganun yata ang ginagawa. some of them are just great thinkers who like being difficult. perhaps that's why i prefer chomsky over the lot of them: grounded guy. i mean, f i wanted difficult, there's always ezra pound

I was then a very unhappy young man. I suppose young men are fond of unhappiness. They do their best to be unhappy, and they generally achieve it. And then I was shamed because I discovered an author who was doubtless a very happy man. It must have been 1916 when I came to Walt Whitman, and then I felt ashamed of my unhappiness. I felt ashamed that I tried to be still more unhappy by the reading of Dostoyevski.
—Jorge Luis Borges

—sana lang. but the changes inside the classroom, only the students could be the judge of that. i still think may ibang (at baka mas mabuting) natutunan yung mga iba na katulad nyo who had to go through a more punishing routine.

—o yung masaker na nakalimutan ng lahat. parang as a collection of short stories muna bago iintegrate bilang novel, at least that's how i would do it

—how would you teach crime and punishment?

—tama ba? or am i mixing this with ivan k?

—rasko then. of the same cloth kasi. but it's an impressive cloth so okey lang kahit makailang beses ginamit ni dosto

SR.SOL— That you may gain a clear understanding of what needs writing?

ANATH— That I won’t forget who to translate, and why. Whose ideas matter.

SR.SOL— Only that why concerns me.

ANATH— Always have, always will. Maybe that’s the reason—

SR.SOL— For the moment, I’ll assume it’s no exercise of the pathetic.

ANATH— Very kind of you. Once, an uncle of mine said that the world brims with good works, but not one from a pure intention, and that was why he’d rather sleep with a bottle.

ANATH— Well, he was drunk when he said this, and that’s why I even mentioned it. I’m not out to justify myself.

SR.SOL— All our statements justify our deeds. Statements that don’t seem to justify our actions are in fact justifying hidden or forgotten actions.

ANATH— So much then for the infinite variety of statements. But if that’s so, what are questions trying to do? What’s a question like “do you drink?” trying to do?

SR.SOL— You are burying yourself. This is what it’s all about. Nothing heroic, particularly because you’re doing it in full view.

SR.SOL— I don’t want to discuss your salary, so don’t go there.

ANATH— You can, for once, be generous and take it as an act of commiseration, an act of absorbing off-shore suffering to the point where the redundancy becomes painful because, well, no suffering was ever foreign.

SR.SOL— Maybe you’re play-acting. Yes, but why? You are scourging yourself because of the gladness in your heart. Or it’s not happiness altogether. There’s something, there must be something because you’re doing it in full view.

ANATH— I have friends, the most perceptive of friends. I have a grand total of ten readers, two of them are myself. I have seven standing advisees, no eight, but he has receded from plain sight. Another has tasted metafiction in English and will require mechanisms for rehabilitation when she regains her senses. A third is drenched in the drippings of the mother tongue. I should keep up, or seem like I’m keeping up. Because I’m doing this for him, this third one. And then, and then there’s the first—

SR.SOL— Of course not, this was never about them. Or is it … my God. You filth, you filthy stretch of skin! I know this pattern ... you have been laying groundwork!

ANATH— Hey, listen. I’ve got this appointment. Lunch, or something.

ANATH— Or coffee. I have family whole for another Sunday.

SR.SOL— Gargoyles. You’re fencing yourself in with gargoyles. I should have seen this sooner. Translating’s a truly roundabout way of doing it—and the texts double the view—but the purpose is unmistakable.

ANATH— However inexact a practice. Take “gargoyle,” for instance. Let the first draft reflect that I elect the word “bul-ol” as the closest Filipino equivalent, culturally speaking. “Herm,” the Greek.

SR.SOL— Neither herms nor colossi. You ball of spit.

ANATH— Still not getting it. That’s why I’m doing it in full view. Because you’ll never get it, and I want you to appreciate your mortal thresholds.

SR.SOL— My life is all about embracing my limits.

ANATH— And the embrace has far too short a compass. I’m sorry.

SR.SOL— Sorry, because no one has ever done a thing such as this for me. No one’s ever tried to ward me off.

ANATH— Because no one sees you coming. That’s your charm.

SR.SOL— Who has taken the time to carve the skulls of saints with my initials?

SR.SOL— You mentioned a lunch meeting. And I should return to my charitable works, do excuse me.

ANATH— You read people like me. Us beggars. You read the invisible. That’s as charitable as it gets.

SR.SOL— I was referring to the floods. There are medical supplies to carry. Luggage. Soup kitchens.